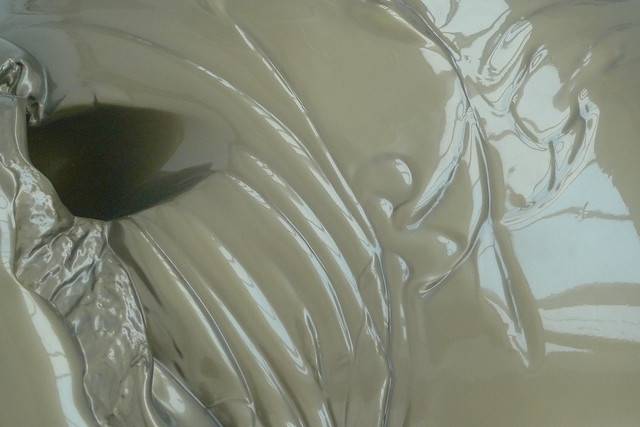 Brian Dillon’s ‘Sanctuary’ (Sternberg Press, 2011) is a short novel of sculpted prose which details the evolving ruin of a modernist building through the research of an architectural historian and his scotoma afflicted lover. There are overlaps, as much in sensibility, formal execution, as in subject, with the work of Alain Robbe-Grillet, George Oppen, Andrei Tarkovsky or Patrick Keiller. Dillon’s uncompromising materialism, his observational faculty and precision of language, proves an antidote to the gratuitous ruinporn that’s been spreading of late. A work that takes the better part of two pages to detail the chemical and physical processes undermining the structural integrity of aging béton brut is a work I’m ready to engage with.

Questions of preservation and ruin remained on my mind as, whilst reading the novel, I kipped a night at Le Corbusier’s Unite d’Habitation in Marseille, a building which will soon be pending tentative listing, along with many of Corb’s works in Chandigarh, for UNESCO World Heritage status; as sure a sign as any that modernism is on the brink of achieving a historicity its exponents, were they alive, would likely feel uncomfortable with.

On the third floor of the building I found the (still functioning) postbox of L’Esprit Nouveau itself, and photographed it. I took this photo as OMA embarked on a CRONOCAOS Preservation tour, a critical account of the “climax of preservation”. The exhibition states,

“Preservation and modernity are not opposites. Preservation was ‘invented’ as part of a groundswell of innovation between the French Revolution and the Industrial Revolution in England. In a maelstrom of change, it is crucial to decide what will stay the same…”

Rem talks of “an incredible increase in nostalgia and decrease in memory… [as] the field in which preservation currently takes place”.

Modernism is engaged in this ironic cultural endgame, finding itself preserved — mummified to meet the needs of global tourism. A betrayal of l’esprit nouveau, whose attitude, after all, could be distilled down to the ethic of beginning anew, an ethic of erasure, rupture, of discontinuity. The spirit of modernity itself.

It’s this spirit we find ironically assimilated into yet another legislated nostalgia. Shorn of all social content by powerful heritage industries, permitted to endure as aesthetic artefact, emptied of its unifying vision but retaining the powerful circus pull, grotesque and exotic, of the magnificently failed project, its legacy restrained to its formal - standardisation, glass façades, béton brut - rather than social content.

And yet, I can’t help but feel there’s more to our resurgent fascination with architectural modernism, be it through the touring exhibitions, recent publication and exhaustive documentation of early Soviet projects (photographed by Richard Pare, amongst others), or a reclaiming of its militant political ground. The binding theme driving this renewed interest is for me to be found in our new forms of networked publics, the resuscitation of the public, perhaps an esprit nouveau of our own.

The legacy ‘crisis’ facing these buildings stems, of course, from the fact that modernist architecture was in ideological ruin long before its material degradation was complete. The dynamism of late capitalism out-manouvered the static concrete, fixed relations in space designed and built, in some instances successfully, to last hundreds of years.

It’s to this contemporary condition of modernist architecture that Dillon’s novel speaks, detailing the parallel evolution of that architecture not deemed worthy of preservation, as it succumbs to neglect, decay, structural degradation, collapse and eventual ruin.

The poetry, as always, is in the material.