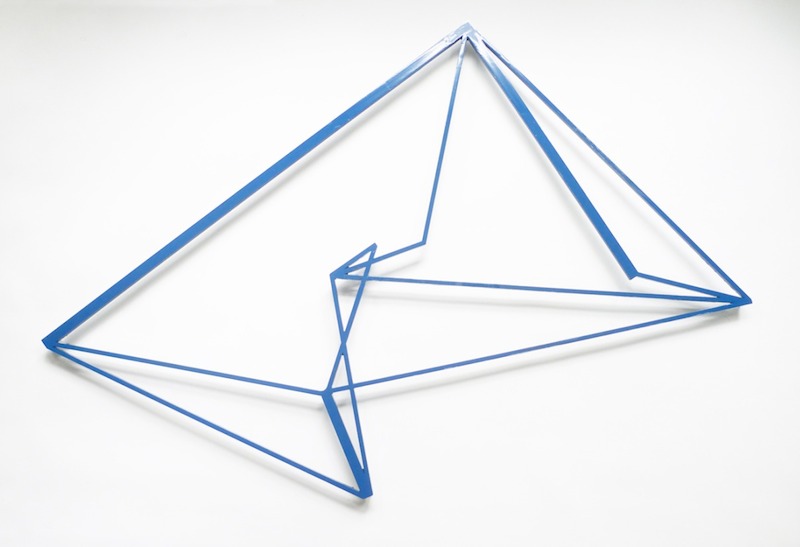 The network form visited us at the end of history, announced its own temporality, and promptly yielded a new orthodoxy – elevating connectivity to an ontic status. Of the many categories destabilised by this rupture, the avant-garde survives in a conflicting state of both historicity and active deployment.

It’s as if art discourse – blithely absorbing critique from anywhere without altering its fundaments – is too busy validating itself ever more acutely within the market form, content to pick through its own ruins for a remnant of the political. Its spurious attempts to adapt to our networked reality take the form of a deep market cynicism, as evinced by the recent turn known as ‘post-internet’.

Relational aesthetics, nominally the discursive image of this networked transformation, announces that “anything that cannot be marketed will inevitably vanish” (Bourriaud), while it considers the historicity of the avant-garde a given, without pausing to critique the network as such.

One might shift the focus to the circulation of images and abandon the art work altogether (Joselit, Vierkant), but lacking is a critique of the network which engages with the technics of said forms, while allowing for a relational practice that could still be considered art.

P1. The network should be treated as a hegemonic form.

All too often here art is subsumed within a mimetic activism, forced into a “substitutive political function” (Ranciere), expanded into divergent practices, dissolved as a distinct labour - rendered illegible as an arbitrary social form.

Meanwhile the avant-garde endures as a prop in art’s claim towards a radical politics, just as art extends its influence as a vehicle of an accelerating finance capital. An empty category performing a symbolic role as simulacra, it persists in a dysfunctional discursive formation – the indeterminacy of the art object (Malik) having destabilised all criteria.

And in so far as capitalism can be said to be over as a fully functioning mode – no longer able to ground its own premises – but rather only reproduces itself as a delusional pathology, perhaps the same can be said of art discourse today.

P2. Open protocols have given way to an inward turn.

If the avant-garde is grounded by an outmoded conception of time – the progressive telos of modernity – the atemporality of the network instead suggests a category of practice based on asynchronous flows between peers.

The open protocols of the early internet have given way to hermetic clusters of connectivity to be found in self-organised cliques. The emancipatory promise of rhizomic practice, as an unfolding of inputs and outputs, has retreated in favour of an inward turn.

The graph theoretic term clique denotes a densely connected subgraph embedded within a wider network. Irreducible to manifesto, cliques are a fluid practice with no need for rooting. They identify themselves through relation, affinity, communication – offering an alternate conception of relational practice.

Cliques generate semiotic chains legible only to those nodes with the relevant degree of connectivity. Linkages are the currency and character of a clique. Meaning resides in their relations, internal and external – their edges are substantial.

Accessibility is limited, while visibility is obscured. By definition inwardly focused, the exclusivity of the clique is not to be confused with elitism, but rather a symptom of resistance as a guiding vector of practice.

P4. The enclosure of the information commons is a historic event.

The inward turn signified by the clique can be attributed to our swift descent into a society of control – marked by mass surveillance, the privatisation of social relations, and the pre-emptive logic of algorithmic governance. In response the clique encodes meaning cryptically - exhibiting its own form of black transparency (Metahaven) - legible only via a leakage of signification from within.

The geometry of the clique is resolutely triangular - the fundamental expression of a non-planar graph. The process of triangulation is the means by which nodes are recuperated into the geographic domain, returned to a jurisdiction, identified and rendered objects of state power.

P5. Forming and dissolving with regularity, cliques are fluid in identity.

At once performative and insular, cliques are ambiguous enclaves of activity. Their value is to be located in relations between actors, in the flows engendered by an intensive connectivity, not solely in concrete instances of labour known as art work, but in trails of information, lines of flight.

Just as the avant-gardes of the past produced negative commodities, the networked clique responds to information as the dominant commodity form. Its acts are necessarily on the plane of information.

P6. The clique is a response to a world of universal resource location.

Cliques afford varying levels of visibility and diverse politics. HUO ghost writers form a surreptitious group, creating a semblance of curatorial omnipresence within the art establishment. By contrast luckypdf evolve a public clique, developing relations and affinities with institutional actors, while Anonymous create a protocol for nullifying authority at its source, banning identification within their practice as such.

The etymological root, claque - a group of sycophantic followers, a group hired to applaud a performer, as in the theatre and comedy of Rome and Athens.

P7. An enduring myth of our age is that networks are flat.

Cliques are not exempt from power, but instead experience a variety of network effects. Control is exerted through connective asymmetries, power laws residing in degree distributions.

A clique stepping into an institutional environment invariably experiences a dislocation. Conflicting domains collide. Descartes meets Euler and a series of slippages and mistranslations ensue.

P8. The crisis of the institution is topological in nature.

The fragmentation of networked culture erodes the mainstream as a useful category, rendering irrelevant the notion of subculture or vanguard as such. Today giant clusters instead loom over our cultural climate, pervasive hyperobjects unto themselves, expansive fields of contiguous connectivity that cannot be escaped.

Institutionalised power reacts to the networked condition by manipulating topocratic regimes - attempts at structural control via topological manoeuvre. Corporate and state nodes engage in public relations in a desperate bid to influence what is no longer a public sphere. The opacity and fluidity of the clique are attempts to evade assimilation.

P9. The avant-garde exhibits a nostalgia for the sovereign.

Both cliques and the avant-garde convey militaristic correlates. Whereas the advanced guard sought to claim new terrain on behalf of a sovereign, the militant cell is a deterritorialized and stateless clique in constant flight, a nomadic assemblage.

The ‘future’ is no longer available as a shared referent - one can no longer advance. The network admits an elision of time, marked by periodicities and retracings.

Renouncing futurity, the clique is instead engaged in a continual instantiation. Residual instances linger in the distributed cultural memory of the network as evidence of net work. These artefacts amount to strategies to wrest back control from the treadmill of cognitive labour termed present.

P10. Connectivity has itself become an ontic category.

In a perverse inversion, the failed avant-garde fusion of art and everyday life finds its mirror image in an expansion of work into all aspects of the social - the absorption of creativity and affect by cognitive labour at the service of capital.

There is no longer an outside, in a broad sense we are enmeshed. The network is a new orthodoxy that can only be negotiated from within.

The space of flows brings forth its own forms of resistance, rendering the avant-garde a topological anachronism, an obsolete metaphor deployed by a tired apparatus. It finds itself supplanted by the informational folds of the networked clique.