Notes on Seminar 2 of Capital as Computation @ The New Centre 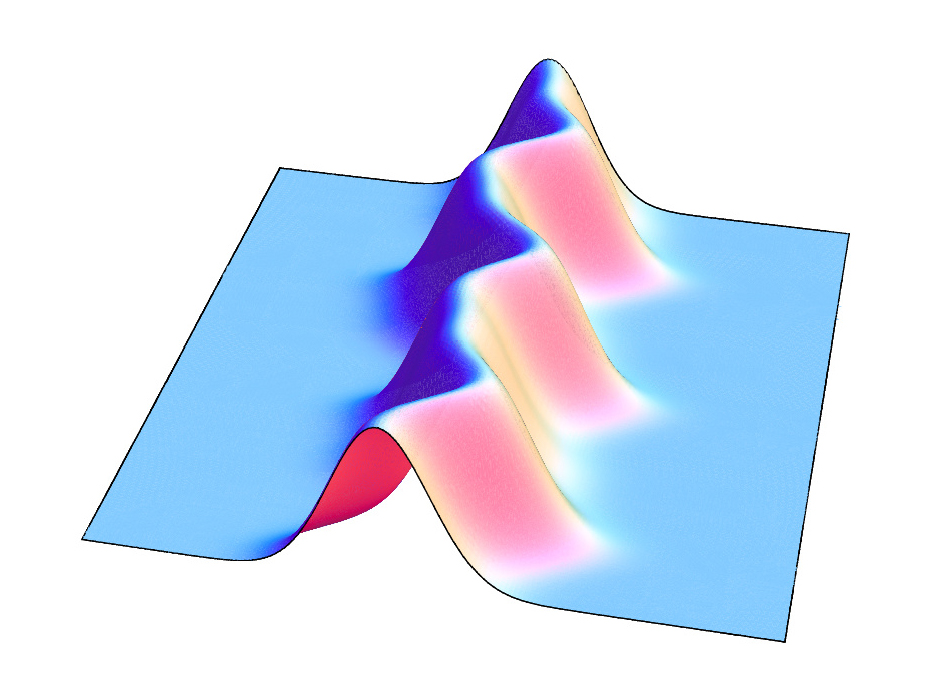 The informational commodity asserts itself as the dominant commodity form. The circulation of capital through financial derivatives outstrips that consumed in the exchange of real commodites at a ratio of 10:1 (BIS), while a third of global GDP is now tied up in financial products (BIS: Table 19).

The medium of contingency embodied by the market locates value in the relation risk ~ volatility, encoded in derivative pricing mechanisms. Endless bifurcation is our fate in a regime that capitalizes risk by manifesting volatility in price differentials, asserting an ontology based on what Lucretius called clinamen, a deep indeterminacy of being.

Bifurcation summons contingency – there is no cause, or sufficient reason, for a system to adopt one equlibrium state over another during a symmetry-breaking bifurcation. With no natural law to ground it, state itself becomes contingent. Bifurcation is this very process of contingency taking place in phase space.

Wiener’s cybernetic vision of stability via feedback has been supplanted by a continual pricing of a radical contingency that is neither probabilistic nor predictable. In an ironic twist, Wienerian dynamics are embedded in the pricing of derivatives (Black-Scholes-Merton), which abdicate all predictive duties to instead represent market movement as a random walk, a non-deterministic trajectory without memory.

The pricing mechanism of finance is a mode of capital accumulation oriented around power asymmetry in the market (Nitzan & Bichler). In this “power theory of finance” (Malik), capital is “a dynamic power-ordering organized through price as its measure/medium” (Ibid). Labour is absent, the commodity withdraws to reveal a regime grounded in pure difference.

In this interpretation, price itself writes the contingent reality of the market (Ayache). In concord with Bifo’s observation that finance is “the emancipation of the sign from all referents”, the underlying asset vanishes from view, rendering finance an “engine, not a camera” (Mackenzie), an ontological force of little representational value, nothing but a volatility smile beaming back at you.

The risk ~ volatility relation is a measure of exposure to future contingency. A power theory of value bases capital on a projection in time, namely a discounted capacity for future earnings (Nitzan & Bichler). In the form of futures and options, derivatives continually inscribe contingency into the present by the pricing mechanism (Ayache). This is an apt definition of total hegemony – to have hedged your future against all contingencies, to call this hedge the present.

Here cybernetics is cast aside for a catastrophe theory of history, volatility as an agent of accumulation, perpetual crisis administering the shocks needed to bifurcate the price surface, singularities acting as engines of risk. As proposed by Rene Thom, catastrophe may be generated by a system from within, rather than imposed as an exogenous shock, leading us towards an autopoietic theory of finance, capable of regenerating itself while on the cusp of self-induced collapse.

The once hyperbolic claim that capital has transformed into “abstract positive feedback” (Plant & Land) to a threshold where “divergence has reached critical proportions” (Ibid) begins to ring true. The failure of cybernetics to act as “a defence against the cyberpathology of markets” (Ibid) has allowed the bifurcating angel of finance free reign.

Like Abaddon – the exterminating angel – finance casts its own plague, but on the emergence of what Badiou calls an event. The circumscription of contingency, its complete absorption into the scheme of capital accumulation, attempts a suppression of the evental by adopting its very undecidability as the basis of value, by pre-emptively rendering it calculable.

Meillassoux’s metaphysics – which asserts, through the principle of unreason, the only necessary absolute as contingency – appears resonant with an ontology of finance, a mode whose only productive function is the generation of difference, whose limit condition is that of the chaotic orbit.

But contingency is itself of the order of Number. Chaos is by definition a parametric phenomenon, topologically identifiable by a dynamics which eludes basins of attraction. This is the ultimate undoing of Meillassoux’s proposal, the fact that Number never disappears as an entity underpinning an absolute category which should admit no grounding.

We might say, rather, that contingency is the trajectory of Number through time (entropy), constituted as event, as “something that finally happens” (Meillassoux: 108), the very condition of the market, which in turn enacts a temporal indexing of differentials via pricing, as a means of harnessing contingency as risk.

The deferred difference of the derivative pricing mechanism, the pricing differantial (Malik), echoes the recurrence relation embedded in computation. Cascading bifurcations are likewise recursive phenomena, producing recurrent sequences of states (De Landa: 20). One might say the pathology of the market is the recursion of difference manifest in pricing, producing “ineliminable volatility” (Malik) endogenously, self-reflexively perturbing the trajectory of the derivative price.

A parametric spectre of catastrophe haunts finance, which proliferates bifurcations in the intensive realm of the virtual (Deleuze). It is the circumscription of potential actualities that is at play in the pricing surface (Roff), a dynamic terrain that continually destabilizes its own constitution (implied volatility).

Finance emerges as a hegemonic apparatus busy mastering time as a medium of contingency. Undermining finance power may involve parametric strategies, attractors with which to lure it into other orbits, in a bid to reclaim the constitution of the present. Contingency, from contingere, may ‘befall’ us (Meillassoux: 108), but our economic inscription of it remains an open practice.